Today was day six of the pilgrimage. It feels like much longer, in a positive way: the experience has been so rich. I have entered a new community, of pilgrims, and a new country with its language and culture. It’s been physically challenging, and spiritually rich.

Yesterday we walked 24 kilometers in the mud, mostly, after an adrenaline filled day walking in the rain leaving Pamplona. I walked both days with Caroline from Chicago. She is having her pack transported each day, and walking with her daypack. She has a slow and steady pace, and we stopped to smell the beautiful roses along the way. Her friend from Chicago, Gina, is an athlete, and walks very fast. I kept to her pace between Roncevalles and Zubiri. They are both wonderful women and I’ve shared 2 hotel rooms with them, and had such a fun time. Yesterday, I hit some physical wall: felt weepy in the afternoon, and realized that I had not drunk enough water, and my camelback was dry. We didn’t have snacks with us. My legs were rashy. Basically didn’t feel too good after the first 15 kilometers. An older German lady was walking behind us and said, “are you ok?” I said, “I’m not sure,” and she opened her pack and gave me some of her water. Then she said, “I am a healer, come here.” She put her hands near me and told me to visualize my feet and legs becoming better. We conversed a little–I don’t speak German and she doesn’t speak much English–but we understood each other in the way that Pilgrims seem to along the Camino. Caroline took a photo of the two of us. 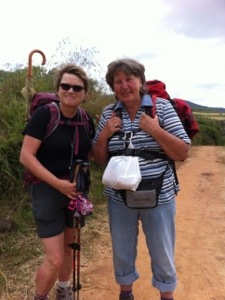 One thought on “Reflections from Day#6”

This site uses Akismet to reduce spam. Learn how your comment data is processed.