When I left Albergue Jacque de Molay I had one of those first thing in the morning thrills of freedom. The day was wide open, and exciting. I love that feeling! Zing! My legs felt strong, and everything I had was on my back. (Well almost everything. My daypack  in the vestibule waiting for Jacotrans.) I wonder why I don’t feel it more often. It must be all the endorfins.

The Camino followed the Autovia for most of the day. I enjoyed the huge directional sign that pretty much described my Camino 3.0: Burgos to Leon! 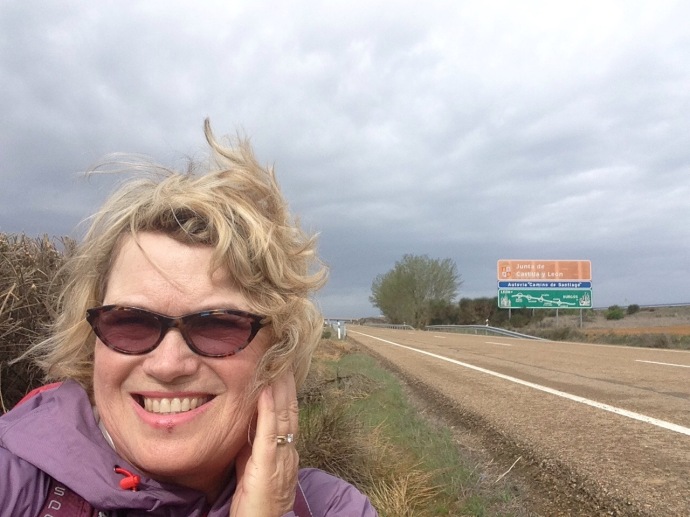 We also passed out of Palencia and into Leon. The way marker looked like it predates the Autovia.

I love the layers of ancient and modern along the Way.

A little farher on, I ran into Tami again. She had ended up at the other Albergue in town for the night. (There are less than 100 people in the village. The Albergues are the only businesses.)

It was good to see her, and we walked all the way to Sahagun together. We’d only met a few days ago, but it felt like I’d known her a long time. She and I were comfortable saying hello and good-bye, and wordlessly knew when to give each other space. We both wanted to experience the Camino solo, but enjoyed each others’ company. She had walked the whole Camino multiple times. The rigor and beauty of the Camino challenged her and gave her peace, as it did for me.

Her more evangelical vocabulary of faith was different than mine, and yet we talked about God and I enjoyed her perspective. She talked about “knowing Christ,” and it made me think, “do I know Christ? I strive to follow him, and worship him, but do I know him?” Thought-provoking.

The last few kilometers to Sahagun were tedious. The Camino wound through a lot of indescript and abandoned houses with “se vende” signs. Just as I was going into “grind it out” mode we came upon a spot that had a strong spiritual energy.

It was a like a place out of time: a little Roman bridge that crossed a fast-running river. The weeping willows were leafing out and there was an ancient (locked) chapel on the other side. We stopped and took pictures.

There’s that saying that pets cross over “the rainbow bridge” when they die. I wonder if I’ll cross over one of the many beautiful bridges on the Camino when it’s my turn. 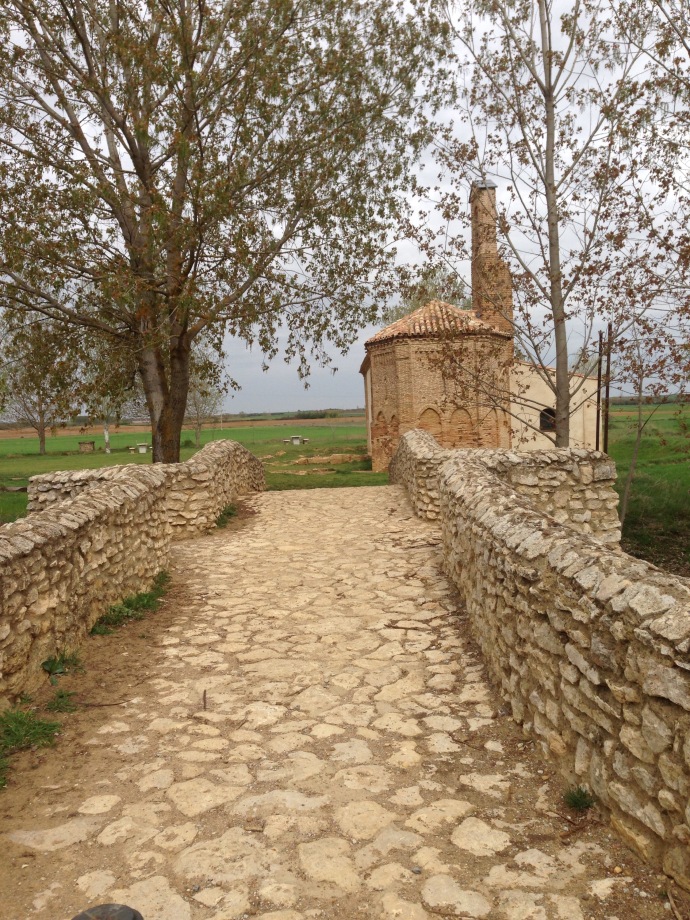 What a beautiful day on the Camino.

Last night I stayed in Foncebedon, a tiny village in the mountains after Astorga. Because I was concerned about my ankles, I decided to taxi up the hill to give myself another rest day but still make some progress. I enjoyed sitting in the front seat conversing (barely) with the taxi driver, who was a Bono lookalike. He very graciously stopped to check that my trekking poles indeed made it in the trunk.

I got to Foncebedon early and hung out all day. It’s a tumble-down village of slate stone. Lots of it has fallen down or is in the process of falling down. It reminded me of the song our son played on the cello from the Suzuki method: “Moon over the Ruined Castle.”

But there are 4 Albergues which are bringing the village back to life. I stayed in Monte Imago, run by a small group of yoga enthusiasts. Their shared paella dinner was fantastic. And there was a cozy vibe. I slept straight through the night and didn’t hear any snoring.

This morning I had my pack transported to Acebo, about 10k away, to be conservative on the mileage. It’s still a little unnerving to hit the trail and know that my pack is sitting there at the place I’ve just left. It’s a good illustration of faith.

The pack transport firm, Jacotrans,hasn’t let me down yet—I put 7E in the envelope and write a destination, and it magically shows up further down the Camino.

So off I went in the fog, towards Cruz de Ferro, one of the landmarks of the Camino. It’s a cross on a tall pole around which pilgrims have left stones and momentos that symbolize what they would like to leave behind on the Camino, or something in memory of loved ones. And many other things in between. People bring stones from home and other small items. The fog

was so thick I didn’t see the Cross until it was right in front of me. I left a stone and said a prayer, though, I confess, the Cruz de Ferro did not move me as much as I expected. It was right on the road, not as isolated as I had pictured it.

The fog and sun made for beautiful light the next few hours. It was totally silent and there was a timeless feeling—I would not have been surprised to see people in medieval garb or even fairies.

I got to Acebo early, and my pack was there, but I wasn’t ready to quit for the day. So I repacked everything in the main pack and went on, another 10k . Ankles are doing well, and I felt so energized by the scenery and the experience of walking today.

The last 5k to Molinoseca were tough—all downhill on rocky ground, but I felt confident about continuing on to Molinaseca..

I’ve picked up a bit of a Camino tribe: the Hungarian sisters, the Finnish woman, Austrslians, and the 70 something siblings are here at the Albergue. I’m getting to like bunk bed life—as long as I get the lower bunk. 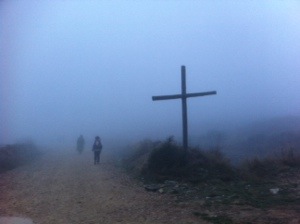 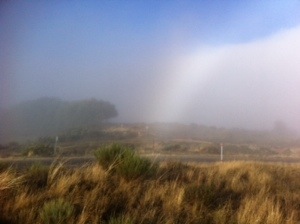 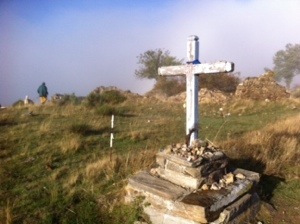 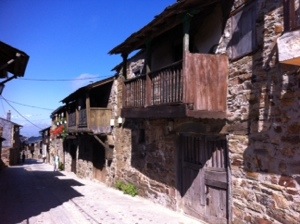 I loved my day hanging out in Los Arcos yesterday—experiencing the fabulous church, sitting at the cafe in the town square for lunch and later, dinner with pilgrim friends. Gina, Caroline and I stayed at a cute auberge, and splurged on the more private rooms. They shared,and I had my own room at the top. The ceiling has the original heavy wooden beams. When I went to bed at 10:00 or so, I heard what sounded like a married couple arguing in Spanish. I rolled over, wondered where it could be coming from, next door? How? The building was stone. It didn’t sound like an auberge encounter. The whole place was close for the night. I feel asleep. At about 3 I heard a woman crying out in Spanish and screaming! I was still half asleep, and wondered what the heck?? In the morning I commented to Gina and Caroline about it. Only Gina heard any of it. She thought it was on my floor above her. The Irish woman on my floor heard nothing. As we discussed it on the trail today I realized how strange it was.

The Aubergue was in a building that had to be 300 years old. Who had lived there in all that time? Certainly, many, many people with lives I would never know. Were the voices I heard echoes of another time, of energy held within those walls? I’ll never know. I do know that Spain has an ancient and passionate soul. The voices were not scary. I slept well and felt comfortable in the room. They were human and very real. It was yet another lesson in the mysterious quality of Spain.